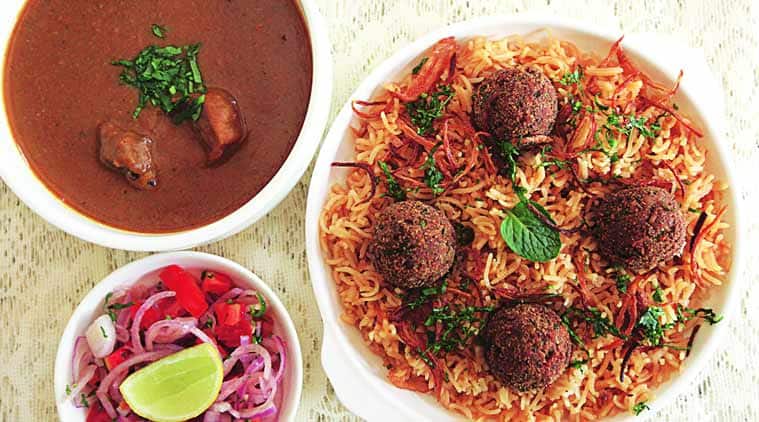 In the last month of 2013, SodaBottleOpenerWala opened at Cyber Hub, Gurgaon. The Irani cafe, a tribute to Mumbai’s dying cafe legacy, Soda introduced Delhi to Parsi food. Restaurateur and owner AD Singh says, “We were going for an eclectic mix of Parsi and Irani dishes overlapping with Bombay’s street food. In the process, we brought Parsi food onto Delhi’s plate.” And while the cuisine had been present in the Capital under the aegis of the legendary Mrs Dhun Bagli at the Parsi Anjuman for years, it had never really been on the food map of the city’s hoi polloi. Soda, with its sumptuously eccentric interiors, a bakery corner that rolled out fresh cookies and naan khatai daily, suddenly made Patra Ni Machchi (pomfret steamed in banana leaves) and Saali Boti (meat curry with potato matchsticks or ‘sali’) du jour in Delhi’s dining lexicon. The restaurant has two branches, one in Delhi and Gurgaon each, and will soon open in Noida, Hyderabad and Bangalore. Something is clearly clicking.

“Like with every other regional or community cuisine, Indians are now curious to see food that is being made within the country’s borders,” says Chef Manu Chandra of Monkey Bar, explaining the sudden spike of popularity the cuisine is enjoying. His restaurant has a few Parsi dishes on its menu including the Berry Pulao and The Parsee Orderlies’ Mutton Curry. “As far as its appeal, Parsi ticks off multiple checkpoints, be it in its taste, presentation or health. Also, it uses ingredients and cooking techniques that aren’t very common in our food repertoire,” he says.

Rahul Dua, who runs the much-vaunted Cafe Lota, agrees. He recalls the first time he had a Parsi meal, at a friend’s house, about five years ago. “It was different from the usual, yet there was something so comforting about it. I could eat it every single day,” says Dua. That Parsi dishes extensively use meat and seafood was another big pull. So enamoured was Dua with the cuisine that he toyed with the idea of introducing home-style Parsi food in a restaurant format. “I thought people need to be eating this food”, which he achieved recently by opening Rustom’s Parsi Bhonu at Adchini, with his girlfriend, Kainaz Contractor, whose family was the inspiration and source of recipes.

Parsi food is characterised by a mixed palate of largely sweet, sour and spicy, using culinary techniques such as steaming and baking, apart from the usual frying and broiling so common to most Indian foods. These recipes, while seemingly simple, require certain ingredients which aren’t readily available in the city, as well as a certain familiarity of context. As Dua says, “I don’t think it would be possible to run a Parsi restaurant without having a Parsi chef or at least someone who is completely at home in a Parsi kitchen. Kainaz runs the roost at Rustom’s.” At Soda, this job is done by Chef Anahita Dhondy, who has witnessed the Parsi revolution, as it were, first-hand. “A few years ago, I was training at the Taj Mahal Hotel, Mansingh Road, when Ratan Tata came in and asked for Paatra Ni Macchi. The chefs were sort of stumbling around because no one was familiar with Parsi cuisine. Today, apart from stand-alones, even the big hotels such as Taj and Oberoi have Saali Boti and Dhan Sak on their menus and buffet spreads,” says Dhondy, who has made Tata’s macchi, a staple in her own Parsi household.

The ingredients used include Sambhar masala (no, not that kind), Dhana-Jeeru masala and a barrel matured sugar-cane vinegar (manufactured almost exclusively by E F Kolah & Sons of Navsari since 1885), which is what imparts the characteristic tang to many Parsi dishes. “Sambhar is in its most basic form is a chilli and garlic powder, while dhana-jeeru is something like garam masala. You’ll find these in every Parsi household, with each family with their own variant. Mixed together, they’re used to make Dhan Sak masala,” says Dhondy, “There’ll be one aunty in Crawford market making one paste and another one in Grant Road making some other thing.” These ingredients are only available in Gujarat and Maharashtra, the last bastions of the community.

Similarly, Dua and Contractor used the latter’s family’s recipes, practically heirlooms, to create a menu for Rustom’s that offers dishes little-known even to the gourmand (not to mention getting a regular supply of the Pallonji’s Raspberry Soda, so beloved of the community) “We wanted to serve stuff that hadn’t been done before. Even people who’ve eaten a lot of Parsi food on their travels tell us they’ve never heard of stuff like Dhan Dar Patio (a treasured trinity of rice, yellow dal and a spicy curry of usually prawns or vegetables) but they love it,” says Dua, who perhaps sums it up best, “It’s like, at some point in your life, you were meant to eat this food.”

📣 The Indian Express is now on Telegram. Click here to join our channel (@indianexpress) and stay updated with the latest headlines

For all the latest Lifestyle News, download Indian Express App.

World AIDS Day 2020: Know all about the history, significance and theme this year of the major global health issue of HIV – more...

Each year, December 1 is observed as World AIDS Day in order to raise awareness and to unite people worldwide in the fight against...
Read more

Get Latest News, Breaking News and e-NewsPaper at your Inbox

Health officials are hoping that new, long-acting drugs to help prevent HIV infection will be a turning point for the fight against a global...
Read more
CRICKET

The losses to Australia in the first two ODIs in Sydney brought back some painful memories for Indian cricket fans. While the batsmen did...
Read more
ECONOMY

Paytm on Tuesday said it has waived off all charges on merchant transactions, enabling them to accept payments from Paytm wallet, UPI apps...
Read more

Son Carries Body Of Man Suspected To Have Died Of Coronavirus...

Lakme Fashion Week 2020: Kartik Aaryan looks like royalty as he...

ABOUT US
Redheart is an Online News Publishing website. We provide Latest News and Trending News from Politics, Sports, Business, Economy, Education, Lifestyle, Techonology, World, Astrology and so on.
Contact us: support@redheart.in
FOLLOW US
Copyright © 2018 - 2020. All Rights Reserved.